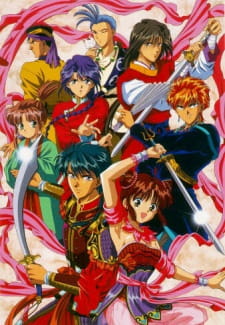 During a visit to the National Library, Miaka Yuuki and Yui Hongo stumble upon a strange old book that casts a red light, sucking them inside its unfamiliar world. Upon arrival, the two encounter hostile slave traders and barely escape with the help of Tamahome—a powerful young man bearing a Chinese symbol on his forehead. But, a moment later, the red light returns and takes Yui away. Desperate to reunite with her companion, Miaka asks Tamahome for assistance. However, the situation escalates when the pair encounters the land's emperor, Hotohori, who believes Miaka is the foretold priestess of the kingdom's protector god Suzaku. By gathering the god's seven Celestial Warriors, the priestess can summon Suzaku and have all her wishes granted. Hotohori hopes this will save his country, and since it appears to be a fitting solution to the girl's problems as well, he convinces her to accept the role. Meanwhile, at the library, Yui realizes she has been brought back alone. Unable to intervene, she helplessly witnesses Miaka traversing through courageous trials as the mysterious book's heroine. [Written by MAL Rewrite]