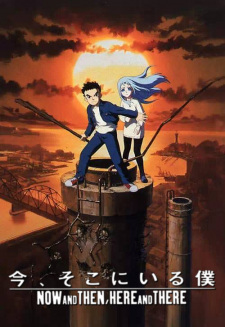 Shuuzou "Shuu" Matsutani lives his ordinary life in peace. He has friends, a crush, and a passion for kendo. Dejected after losing to his kendo rival, Shuu climbs a smokestack to watch the sunset where he finds Lala-Ru, a quiet, blue-haired girl wearing a strange pendant. Shuu attempts to befriend her, despite her uninterested, bland responses. However, his hopes are crushed when a woman, accompanied by two serpentine machines, appear out of thin air with one goal in mind: capture Lala-Ru. Shuu, bull-headed as he is, tries to save his new friend from her kidnappers and is transported to a desert world, unlike anything he has ever seen before. Yet, despite the circumstances, Shuu only thinks of saving Lala-Ru, until he is thoroughly beaten up by some soldiers. As he soon finds out, Lala-Ru can manipulate water and her pendant is the source from which she is able to bring forth the liquid, a scarce commodity in his new environment. But now, the pendant is lost, and Shuu is the prime suspect. Ima, Soko ni Iru Boku is the haunting story of a dystopian world, and of Shuu, who has to endure torture, hunger, and the horrors of war in order to save the lonely girl he found sitting atop a smokestack. [Written by MAL Rewrite]