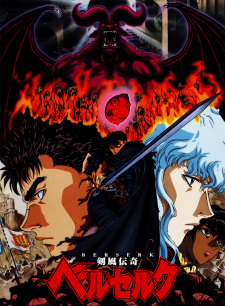 Guts, a man who will one day be known as the Black Swordsman, is a young traveling mercenary characterized by the large greatsword he carries. He accepts jobs that offer the most money, but he never stays with one group for long—until he encounters the Band of the Hawk. Ambushed after completing a job, Guts crushes many of its members in combat. Griffith, The Band of the Falcon's leader and founder, takes an interest in Guts and duels him. While the others are no match for Guts, Griffith defeats him in one blow. Incapacitated and taken into the Band of the Hawk's camp to recover, Guts wakes up two days later. He confronts Griffith, and the two duel yet again, only this time with a condition: Guts will join the Band of the Falcon if he loses. Due to his fresh injuries, Guts loses the fight and is inducted by Griffith. In three years' time, Guts has become one of the Band of the Hawk's commanders. On the battlefield, his combat prowess is second only to Griffith as he takes on large groups of enemies all on his own. With Guts' immense strength and Griffith's leadership, the Band of the Hawk dominate every battle they partake in. But something menacing lurks in the shadows, threatening to change Guts' life forever. [Written by MAL Rewrite]