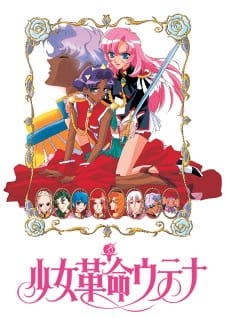 Years ago, a tragic incident befell a young princess when both her parents died. Devastated, it seemed nothing would calm this poor soul. However, a prince traveling through the area came to see the princess, hoping to cheer her up. After wiping her sorrowful tears, the prince gave her a ring carrying a rose emblem and told her as long as she holds onto the ring, they are destined to meet again. The event leaves a deep impression on the girl, Utena Tenjou, leading her to become a prince herself. Years later, Utena attends Ootori Academy, recognized by the same rose emblem as her precious ring's. There, attracted by the scent of roses, she witnesses Anthy Himemiya tending the flowers, accompanied by the Student Council President Touga Kiryuu and Vice President Kyouichi Saionji, who seem to be arguing over Anthy. While Utena thinks nothing of the occurrence, the Student Council gathers to discuss an important matter. Subsequently, a misunderstanding leads to Utena being dragged into the world of Duelists—those with rings similar to her own. The Duelists fight for the ownership of the Rose Bride, Anthy Himemiya, who is said to possess great power. Wanting to prove her capabilities as a prince, and enraged that Anthy is being wronged and objectified, Utena resolves to fight against the Duelists to save her from the cruel fate. [Written by MAL Rewrite]